I haven't been to a day class for ages, in fact not since Miss Prim moved premises, which is over a year ago! Gosh, doesn't time fly?! Anyway my guardian decided that a trip to school was well overdue so I was delivered bright and early on Saturday morning, just as the pupils who had stayed overnight were finishing breakfast.

There were 8 of us in class, me, Emily, Curtis, Richard, Christina, Robert (Titch), Harriet and Timothy. The school day started as usual with us lined up outside the school room until Miss Prim rang the bell. We filed in and predictably everyone wanted to be the back row, away from beady eyes. Me, Christina and Richard were in the middle row. Our uniform was inspected and guardian's letters read out. Mine started really well, but finished with something to the effect of if I misbehaved in even a small way I was to be beaten severely, 12 of the cane as a minimum! Thanks guardian! After inspection and the school hymn we had a general knowledge test. I did reasonably well, getting about 20 out of 24. Christina is from Germany but she did really well in the test considering it's not her first language. Richard did badly. He is from Holland, but he didn't seem to get the same consideration and received six of the best for coming 'last in the test'.

Our next lesson was biology and it was really interesting, we learned about the Artic. It's name comes from the Greek 'arktikos' meaning 'bear'. Not polar bears, but the 'Great Bear' constellation which is above the North Pole. Miss Prim explained the kinds of flora and fauna in the Arctic, the weather and so on. She wasn't amused by my question about "Arctic Monkeys" but I escaped any punishment.

After break we continued our study of the Arctic then started our Art project which was an egg cosy in the style of either an Easter chick or an Easter bunny. Best of all, the eggs we were to 'cosy' were Cadbury's Creme Eggs!

Here are the finished items: 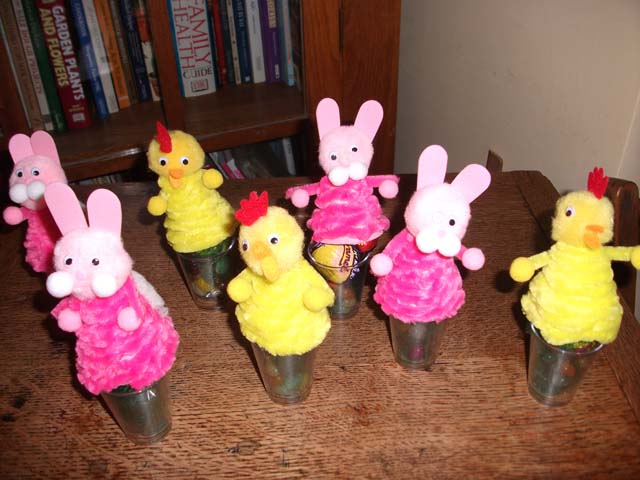 Some time during the lesson Christina misbehaved and had to go out to the front for a paddling. As Miss Prim lifted her gymslip I thought she had no knickers on at all! But then realised she did but they were almost see-through, which was almost as bad. Unfortunately I don't think they gave ANY protection at all (especially compared to nice thick school knickers) and worse she was put on defaulters.

Before long it was lunchtime. The other pupils had chicken and vegetables, followed by apply pie and custard. My guardian thinks I need to lose some puppy fat though, so I had a low-calorie soya meal my guardian had thoughtfully sent with me. But I did get jelly for dessert so it wasn't all bad.

During lunch break me, Emily and Christina sneaked into the school room (out of bounds of course) and rigged a fishing line to a toy mouse which we hid under Miss Prim's chair. it's been done before but its still very funny. The afternoon class was English, Ma'am wrote 20 long words all ending in -graphy on the board, e.g telegraphy, lithography, electrography and so on. We were all thinking that "pornography" wasn't on the list, but Curtis put up his hand and pointed this out to Ma'am! Anyway, we were given dictionaries and asked to find the definition for each word and write an example sentence. It was going very well, but Miss Prim had to pop out o the class to speak with the maid Gillian. On her return Emily pulled the mouse across the floor leading to a shriek. Hee hee. However, predictably Miss Prim wasn't the only one shrieking and we were put on defaulters.

At defaulters Ma'am produced my guardian's letter. She had underlined the sentence about severe punishment. After a spanking I was told to bend over the chair and received 12 of the cane. Then Emily was called in and I had to wait in the corrdior while she received similar. Then I was called back in for the 6 of the cane you always receive on defaulters. It jolly well hurt and I had a spectacular set of 'proper' tramlines on my bum for the next few days!

Guardian seems to think its done me good, as she's booked me in for the May class along with one of my chums, I can't wait!