or The Postman Always Rings Twice

Just a short ramble about the goings on an otherwise ordinary Saturday in deepest Herefordshire. Guardian dumped me outside the school gates and a new boy arrived at the same time, his governess was dropping him off. There was Me, Timothy Edwards, Jill Brown, Bernice, Tessa Boundary, a new boy called Scott, a new girl called Bunty, and of course Richard. It was a bit worrying to find there was also a new schoolmaster, he was called Mr. Lock.

I changed into uniform and joined the other girls and boys in the common room, there was a ringing of the doorbell and Timothy said "oh look there's a post van outside, the bell went again and I said "if it isn't answered soon he will be banging on the window and looking in!" and yes sure enough he did! Ma'am answered the door and we told her he had peered through the window, she marched outside with Mr. Lock and they both peered through the window. While they were deciding that he couldn't actually see anything, Timothy and I discussed the possibility of a day of lessons with the teachers locked outside and decided to act on this by going and locking the front door! Least to say the Lady in charge was not amused and despite my protestations that it was all Timothy's fault, I ended up in Ma'am's office for the inevitable.

School began with the singing of the school Hymn, the new boy Scott is very tall and it was possible to hide behind him to avoid singing the dreaded dirge especially if you moved a little to prevent Mr. Lock from checking if you were singing, Timothy for some reason found this very amusing and was bent over his chair struggling not to laugh, and was summoned to the front to explain himself with the usual results. Bunty managed to enrage Ma'am with her common use of the English language with appalling syntax and grammar but strangely when not talking to Ma'am she was all posh and public school! Tessa had a glowing report and it must have been a forgery. During the reading of Bernice's letter from her Aunt, Ma'am ended up laughing herself into a fit of tears and had to go and sort out her make up and recover which left me stood there like a spare part. I sat in Ma'ams chair to wait and then realised that there was still that bloke teacher sat in the corner and thought better of awarding a few stars to myself and demerits to everyone else!

The warm up quiz was selected by the new boy, Scott and he chose "sport and entertainment". Please remain seated for the next statement... Timothy was top of the class!

Ma'am then started her art and craft lesson, we were making sock puppets. I made a shark out of a striped black and grey sock with sewn on fins and teeth, others made dragons and rabbits etc. Jill's was very neatly made and sewn together, Bernice's dragons tongue was very scary. The most scary incident was when Bunty was given a sharp pair of scissors and decided that the new boy Scott needed a haircut on his legs, and the foolish boy agreed! Luckily for Scott, Ma'am intervened and made sure she only had safety scissors for the rest of the day. Break time came very quickly because we had managed to waste loads of time at letter reading. 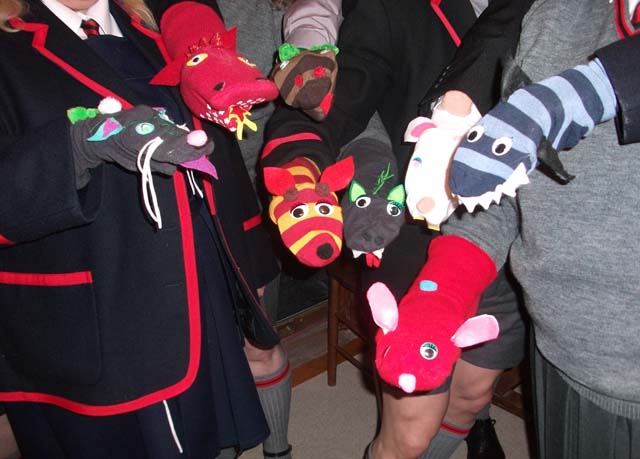 After break it was the baptism of fire for that new bloke, Mr. Lock. He was teaching about the history of the Celtic civilisation, their beliefs and culture, certainly something I have never even thought about! Mr. Lock had his work cut out with Bunty as she gets bored very easily, but she managed to avoid pushing the new teacher far enough to get whacked.

Lunchtime arrived and I had the shock of a school lifetime, "Chips" with fish fingers and peas, no stodgy mashed potatoes or boiled potatoes! Was I in a dream? And jelly and ice cream for dessert, yummeee. Unfortunately Ma'am remembered that Timothy and I were on lunchtime defaulters, which made for a very uncomfortable afternoon on those hard wooden chairs.

In the afternoon we studied the lineage of the Royal Family but only got as far as Edward VII, finished our puppets and then more Celts with Mr. Lock, he was really mean and sprung a test on us. Scott came last, perhaps he is now realising "little knowledge of Celts led to bottom welts"

Afternoon break was great, it was Jill's birthday and we had chocolate cake and sang happy birthday etc. 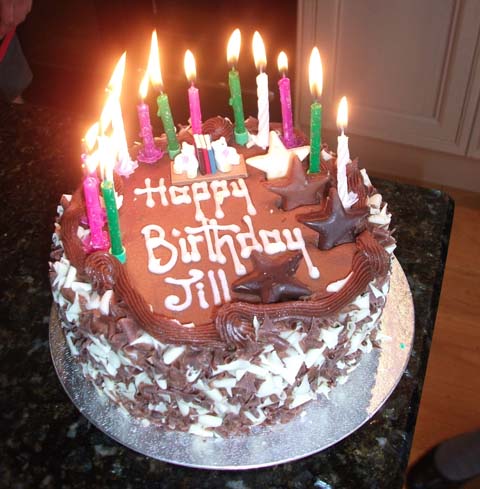 During defaulters we had to finish our puppets or write an essay or in Richards case, to stand in the corner because he hates essays. I suddenly discovered lots of work to do on my puppet to avoid the essay, carrying out some ophthalmic surgery and stitching the eyes in place because the glue was rubbish.

Defaulters was bad on top of the lunchtime stripes, lots of the girls and boys came back with grimaces on their faces. During certificate presentation I accidentally forgot to take the shark puppet of my hand and when it came to shaking Ma'am's hand making her shriek almost as much as I did in defaulters.

Jill's Muir birthday tradition then took place, the brave or foolish opted to give their 14 whacks, I chickened out and delegated to Ma'am because I'm scared of Jill's Auntie!

Once again a great day's fun and games!