A long time ago, in Hereford, at a Day Class, Miss Prim gave each of the pupils a drawing, from which they were to write an essay. This was Jill's drawing: 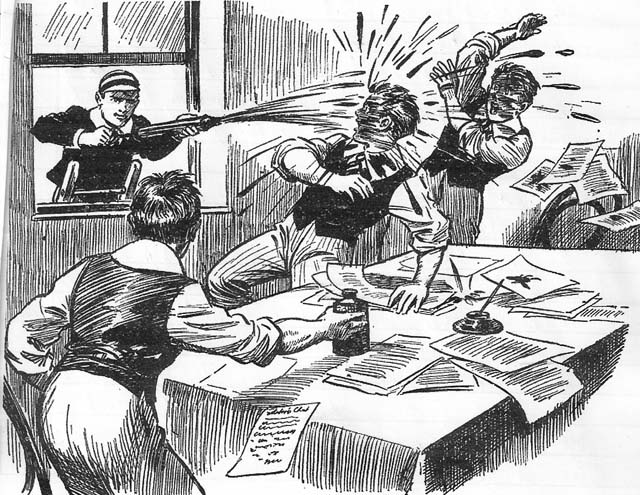 This was Jill's essay:

"That was jolly well played Jonathan", exclaimed Roger as they carried the wickets back to the sports hut. As well as Games Prefect, Jonathan Brown was the Captain of the school cricket team. St.Oswald's had just had their best match of the season, beating the visitors by over one hundred runs.

They locked the shed then made for the changing rooms for a shower and change before prep. Carl Jones was there, changing out of his whites. "I say, Brown", he said, "your old man is in the RAF isn't he? He must be awfully busy with the problems with the Ruskies at the moment?".

"Oh, I don't know," replied Jonathan, "he told me not to talk about that. Careless talk costs lives and all that."

"Oh tosh!" said Jones, "you can tell us, thrilling stuff I'll be bound, spy planes and secret radar projects and things!" Jonathan shook his head and quickly changed the subject.

The next morning was double Latin with Mr.Shilvock, the world's most boring teacher. Whilst Jonathan excelled at games, Latin was not his strong point. At all. He spend most of the lesson making up his own endings for the Latin conjugations and sketching British and Russian tank battles. It seemed like an age before the bell rang and the class swarmed out into the corridor.

"A moment, Mr.Brown", the Latin master spoke softly as Jonathan packed his satchel. The teacher quickly scanned the Latin exercise book and gave one of his special looks reserved for boys who did not excel at Classics and simply said "my study, after prep, boy."

"Yes Sir," replied Jonathan and left the classroom. As he cut along to his next lesson, now rather late, he passed Cummings, a first year boy, talking to Jones. "Oh yes," he balled, "Father runs a special project for the Ministry, some kind of special steel for tanks, I understand, he was telling me about it at half term."

Jonathan scowled, thinking quickly. he was already late for his next lesson, but there was something going on here. He paused, pretending to fasten a shoelace in the style of a cheap paperback detective. Cummings had has disappeared and Jones was walking on his own, wearing a slightly smug expression. Jonathan fell in step behind him.

Jones was walking quite quickly, towards the Art building. Jonathan followed him inside, keeping well back so as not to be noticed. Jones took the stairs and went into the room which used to be used by the camera club when it was running. Jonathan pressed his ear to the key hole, there were sounds of several boys, talking in low, excited whispers.

"That ass Cummings told me a lot of useful stuff," Jones' voice was recognisable. "Well, write it down quickly," another voice instructed, "this bundle of information is almost ready to go. When the laundry van comes at lunchtime we'll throw it in and Boris will get it to our Communist brothers. We've done so well this month, the boys here will tell you anything you ask, and several of their fathers have very useful positions."

Jonathan thought what to do. There wasn't time to fetch ones of the masters before the laundry van came and even being Games Captain, he wouldn't manage three boys on his own. He had a sudden inspiration. He slipped quickly back down the staircase, outside to the bike-shed. He took the bicycle pump from his bicycle and the ladder the caretaker usually kept there. He placed the end of his bicycle pump in a puddle and filled it full, then placing the ladder gently up against the camera club window he climbed quickly but quietly.

"That's me done," said Jones inside the room, "some kind of special metal, Boris will know what to do with it."

"I think not," said Jonathan from the window. He thrust the plunger of the pump in sharply spraying water all over the papers the boys had been preparing. The ink ran immediately rendering the whole lot useless. One of the boys slipped on the water as he turned to see who was at the window, pulling the table with him and spilling the ink well and sodden papers for good measure.

An hour later Jonathan was having tea and buns with the Headmaster and his House Master, and could see through the French doors of the study the three boys being put into a Police car and driven away.


Back to Contributions Page